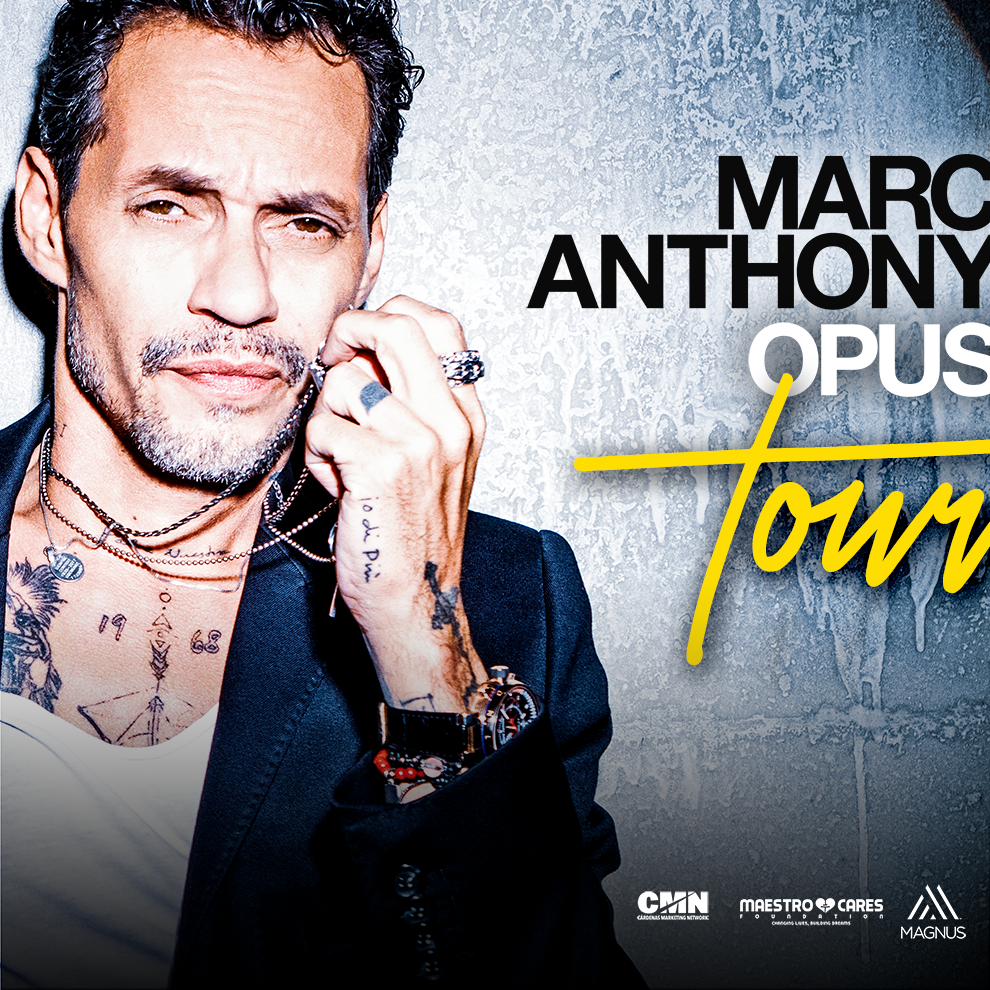 TICKETS ON SALE TO THE GENERAL PUBLIC FRIDAY MAY 10th at 10:00 AM

Miami, FL –May 6, 2019 – Just days after the official announcement of his new studio album “OPUS”, Marc Anthony is announcing dates for the OPUS U.S. Tour

Tour fan pre-sale is scheduled for May 8th at 10 am, other pre-sales runs from Thursday, May 9th at 10 am thru Friday, May 10th at 9:59 am.  Tickets for the general public are available May 10th.

OPUS, Marc Anthony’s forthcoming May 10, 2019 release on Magnus Media / Sony Latin Music, is his first new studio album in six years, and his eighth salsa album in the 26 years since Otra Nota (1993) established him.

Recorded in Miami at Art House Society and Criteria Studios, OPUS is a blistering-hot set of state-of-the-art salsa that finds Marc Anthony teaming up once again with pace-setting producer/pianist Sergio George, who produced Marc’s first salsa megahits and co-produced his 2013 album 3.0 (which was certified 8x Latin platinum). Their imaginative, innovative, and massively popular productions revolutionized the sound of music, bringing millions of young listeners to tropical music.

Marc Anthony is one of the most influential artists of his time and a true ambassador of Latin music and culture. He has received countless gold and platinum certifications from the Recording Industry Association of America (RIAA) and has been credited with over 30 Billboard chart hits and over 4.7 Billion views on YouTube. His latest album, Marc Anthony 3.0, released July 23, 2013, has received an

On November 16th Anthony received the prestigious “Person of the Year” honor from the Latin Academy of Recording Arts and Sciences. In September of 2017, Marc Anthony and Magnus created the alliance of artists and athletes Somos Una Voz, to help provide humanitarian relief to areas affected by natural disasters throughout the southern United States, Mexico, Puerto Rico and other affected areas in the Caribbean.

CMN is the authority in Latin entertainment. As a multicultural creative agency, our common goal is to create and build unique experiences between fans, artists and brands.

Henry Cárdenas, entrepreneur, philanthropist, and founder of CMN, has been a pioneer in bringing Latin entertainment and sports to the United States. The Chicago-based company has more than 100 full-time professionals constantly creating cutting-edge marketing experiences and producing the best events in the country.  To learn more about CMN and its roster of artists, visit www.cmnevents.com or follow us at @cmnevents.