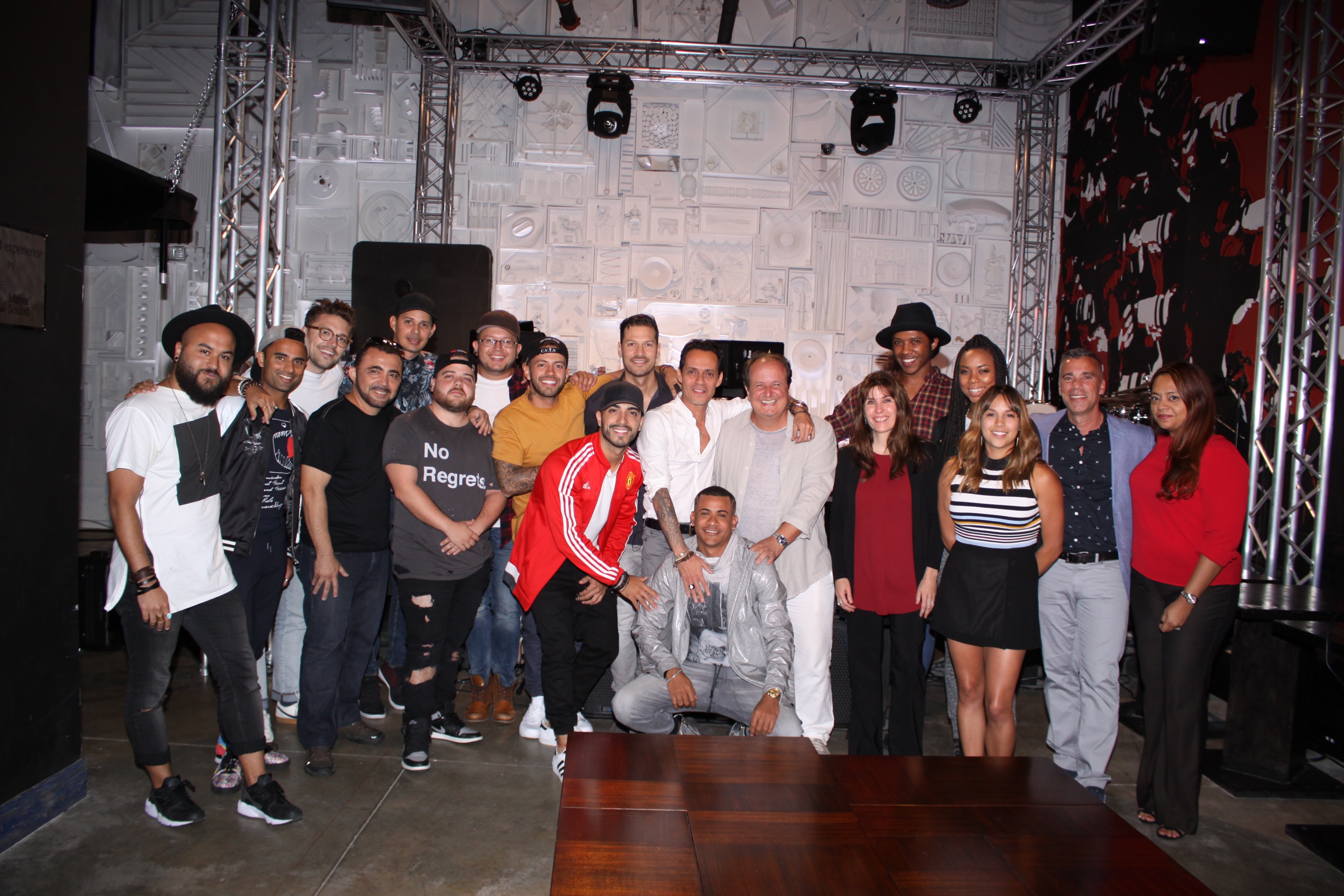 The two-day creative session, led by Marc Anthony and sponsored in part by the ASCAP Foundation, brought together an impressive group of established and up-and-coming songwriters of all music genres. The resulting songs will be considered for future Marc Anthony and Magnus Media artist projects.

Feid sings, composes, produces, plays piano, guitar and records his own music. He has over 150 compositions including “Ginza” by J Balvin and “Secretos” by Reykon. In 2015, he released his first EP, Asi como Suena which includes nine tracks produced by major reggaeton/urban producers. The single “Morena” landed him at #1 on all radio stations in Colombia.

Cuban singer-songwriter who has composed for film and TV and released 3 albums of his own music.  Currently recording his 3rd salsa CD.

MadMusick consists of brothers Giencarlos and Jonathan Rivera. They worked with Daddy Yankee on «Limbo,» which spent 22 consecutive weeks at #1 on the Billboard chart, as well as with Yandel, Wisin, Maluma, Zion and Lennox, Danny Dayan, Alexis and Fido, among others. “Limbo” was chosen for the videogame “Just Dance” in 2014, released for Wii consoles, PS3 and Xbox 360 for Europe, United Kingdom and America.

“Cáceres” is a young and multifaceted Venezuelan artist, where he is well known as a songwriter, singer, music producer, audio engineer, Grammy winner and multiple Grammy nominee. Has worked with many international artists such as Camila, Chino y Nacho, Reik, Sin Bandera, Alejandro Fernandez, Wisin, Marco Antonio Solis, and others.

Tushar Apte is an Australian writer/producer/composer based in Los Angeles. He had a pop charting hit with Chris Brown’s “Zero” and recently signed to Warner Chappell Music Publishing. His other work ranges from songs with Adam Levine from Maroon 5 to scoring some of the biggest television shows including The Biggest Loser for NBC and shows for the BBC. Upcoming singles include Steve Aoki and Matt Simons.

ASCAP established the Song Camp in 2008 as a creative platform for collaborations between songwriters, artists, publishers and labels.  Since its inception, Song Camps have been held in Miami, Los Angeles, Monterrey, Nashville, and Mexico City.

This is the first Song Camp hosted at MAGNUS.

The American Society of Composers, Authors and Publishers (ASCAP) is a professional membership organization of songwriters, composers and music publishers of every kind of music. ASCAP’s mission is to license and promote the music of its members and foreign affiliates, obtain fair compensation for the public performance of their works and to distribute the royalties that it collects based upon those performances. ASCAP members write the world’s best-loved music and ASCAP has pioneered the efficient licensing of that music to hundreds of thousands of enterprises who use it to add value to their business – from bars, restaurants and retail, to radio, TV and cable, to Internet, mobile services and more. The ASCAP license offers an efficient solution for businesses to legally perform ASCAP music while respecting the right of songwriters and composers to be paid fairly. With 585,000 members representing more than 10 million copyrighted works, ASCAP is the worldwide leader in performance royalties, service and advocacy for songwriters and composers, and the only American performing rights organization (PRO) owned and governed by its writer and publisher members. Learn more and stay in touch at www.ascap.com, on Twitter and Instagram @ASCAP and on Facebook.

Since 2015, MAGNUS has been assembling a roster of artists and athletes that includes Latin music icons Marc Anthony and Alejandro Sanz, urban music stars Gente de Zona, and Chino y Nacho, award-winning producers Sergio George and Motiff, and radio personality Enrique Santos, among others. The Magnus Sports division encompasses a roster of over 60 athletes including Chicago Cubs’ Aroldis Chapman and Jorge Soler, in addition to Real Madrid’s Sergio Ramos and Marcelo Vieira, among others.  www.magnusmedia.com