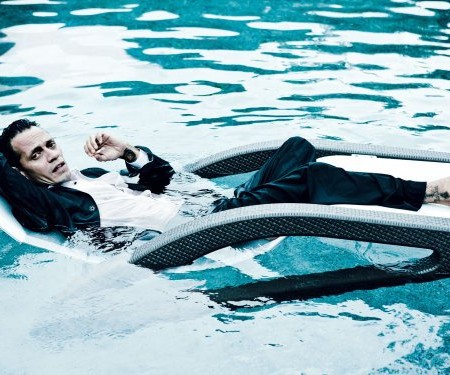 Marc Anthony Returns With a New Salsa Album (and Some Socks)

It was a sweltering afternoon in late spring, and on the twentieth floor of a midtown skyscraper, Marc Anthony was looking at socks. Anthony, the salsa singer, was at the New York corporate office of Kohl’s, the department-store franchise, examining prototypes for their fall line of Marc Anthony menswear.

Anthony can be debonair—he looks good on a red carpet in a black suit—but he’s not the kind of guy who, all things being equal, prefers to spend his time fussing over couture. He is small and wiry and a bit ferocious. At 44, he has the waistline, and the hairline, of a teenager. He’s a millionaire many times over, but his East Harlem Nuyorican roots have not been gentrified out of the picture. He speaks quickly and, often, profanely, in staccato bursts; he chain-smokes cigarettes and drops his ashes in a coffee cup. The effect is more flyweight boxer than ­fashionista. But he is one of the world’s biggest pop stars, and in 2013, pop mega­stardom is a gig that will put you in a ­fluorescent-lit conference room full of ­designers and executives to talk about sock thread counts and sport-jacket linings.

“I remember when the conversation started about ‘branding,’ I wasn’t interested,” Anthony says later. “Everybody’s just slapping their name on shit these days—I’m not that guy. But Kohl’s wanted to go high-end. Gucci quality. Prada quality. At a price point anybody could afford. I love the clothes; I swear by them. And I’m extremely involved. I’m looking at stitching, buttons. These are intense meetings.”

Intensity is Anthony’s calling card—in life and music, as in menswear. You can hear it on his dozens of hits, and on his eleven studio albums, beginning withOtra Nota, his 1993 salsa debut. But the best way to get a handle on Anthony is to see him in concert, preferably at a place like the big barn on Seventh ­Avenue, just a few blocks west of Kohl’s headquarters. Anthony has played ­Madison Square Garden many times, and the shows I’ve been to are among the most intense—certainly the loudest—I’ve ever seen.

The volume begins onstage, with ­Anthony himself—with his grand, rippling tenor voice, as powerful and supple an instrument as any in pop. The real roar, though, comes from the audience. Gringos may know Anthony, vaguely, as a celebrity: as a Latin-music singer with a couple of big English-­language singles; as the skinny dude who used to squire Jennifer Lopez through the pages of Us Weekly. But to see Anthony play to an adoring throng at the Garden is to realize that he’s a culture hero on the level of Jay-Z: the standard-bearer for a musical heritage, for a culture, that migrated from the New York barrio to the four corners of the Earth. Marc Anthony will go down in the annals as the leading Latin-music vocalist of his generation, but he’s more than historic. He’s folkloric.

The Anthony saga gets a new chapter with the release, on July 23, of the singer’s twelfth album, 3.0. That title suggests a zippy modern makeover and, sure enough, the chart-topping lead single, “Vivir Mi Vida,” is a plus-size slab of global dance pop, co-written by Lady ­Gaga’s musical impresario, RedOne.

But “Vivir Mi Vida” turns out to be a one-off. 3.0 is Anthony’s first album of original salsa music in a decade, and it’s meat-and-potatoes fare: bustling pop-­salsa songs, a couple of ballads, lots of big melodies and wind-whipped sentiments, just right for bringing out the throb and sob in Anthony’s vocals. It’s as strong as any album in his catalogue. It’s also, according to Anthony, the easiest work he’s done.

“I used to hate going to the studio. What a fucking chore,” Anthony says. “This was the most pleasurable ­experience I ever had in the studio. It’s a ­privilege to work with the set of tools I have now. I’ve spent 44 years honing the craft.”

Anthony’s vocal style may be the work of the lifetime, but his voice was a birthright. He was born Marco Antonio Muñiz in 1968 in Spanish Harlem. His father was a musician with a taste for schmaltzier flavors of Latin pop. The youngest of seven, Marco grew up listening to “the real good old sappy shit”: Mexican balladeers like José José and Marco Antonio Muñiz, whom he was named after. The Muñiz home was a clubhouse for local musicians; the family hosted parties that sprawled into jam sessions, always with a star turn by the youngest Muñiz.

“My father taught me songs and put me on the table,” Anthony says. “I was this 5-year-old kid, just emoting these songs, like, ‘I lost my love!’ ”

He started singing professionally in the late eighties and became a fixture of the burgeoning house and freestyle scenes. One day in 1990, a friend cued up “Hasta Que Te Conoci,” a song by Mexican singer Juan Gabriel, on her car stereo.

Anthony remembers: “I called my manager and said, ‘I need to sing this.’ He said: ‘Well, maybe do a salsa version?’ ”

Anthony had never sung salsa, and his Spanish was terrible. But as an East Harlem native, the music was in his blood. It was a homegrown Nuyorican creation: Afro-­Cuban dance music, revamped with dashes of big-band jazz, soul, and a healthy dose of street-smart grit. Now it was Anthony’s turn. He went into the studio with the producer Sergio George and gave salsa a ­generation-next makeover. “We did salsa our way. Sergio and I knew house, freestyle, R&B. We put that in there. It just became my sound.”

You can hear that sound, all these years later, on 3.0. The music sticks to a sturdy formula: Songs start as plush pop and segue into salsa grooves, which shift into overdrive roundabout the 2:45 mark, as brass fanfares and background choruses rear up behind Anthony’s fervent improvisations. Anthony sings wonderfully throughout, tearing into ballads like “Espera” and gliding through the graceful guaguancó rhythms of “Flor Pálida.” That song, which compares a doomed relationship to an untended flower, is sure to be taken by some as a postmortem on Anthony’s marriage to Lopez, as are several other numbers, like the embittered “Hipocresia.” But storm-tossed romance is ­Anthony’s specialty. J.Lo or no J.Lo, ­Anthony will always glory in the good old sappy shit: songs that allow him to walk—dance, stampede—across the fine line that separates grandeur and schmaltz.

3.0 is just the opening salvo of what will likely prove one of Anthony’s busiest periods in years. He is at work on another record, an English-language album with ­RedOne that takes the producer’s blustery tunes, designed for cavernous dance clubs, adds the earthy thump of Anthony’s live band, and turns the singer loose.

“The songs are incredible,” ­Anthony says. “RedOne is a genius. He understands melody. He ­understands how to move air, which is what we do at the end of the day.

“I’ve always said that: Music is about moving air. It’s invisible—it’s in the air, and then it’s gone. That’s quite a business to be in; it’ll scare the shit out of you if you think about it too much. You’re playing to 50,000 people, and what you’ve got to offer them is invisible. You’ve gotta make 50,000 people feel something.”

*This article originally appeared in the July 22, 2013 issue of New York Magazine.