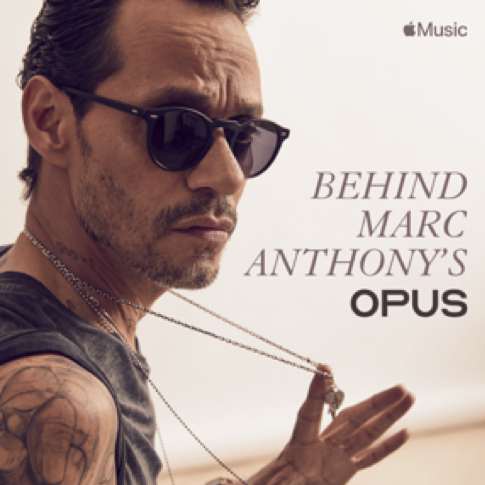 Watch a teaser for the Apple Music film HERE.

Behind Marc Anthony’s OPUS gives fans an intimate glimpse at his process, from the writing to a marathon studio session where he recorded all of his vocals in a single day—on the anniversary of his mother’s passing, no less.

Marc, chose the title OPUS early on in the production process emphasizing its role as a solid masterwork within his massive, much-praised discography.

Marc Anthony comments: “I am thrilled to have the opportunity to share some of the most intimate parts of my creative process as an artist and to discuss in detail the evolution of OPUS in this short film for Apple Music.”

Marc Anthony is one of the most influential artists of his time and a true ambassador of Latin music and culture. He has received countless gold and platinum certifications from the Recording Industry Association of America (RIAA) and has been credited with over 30 Billboard chart hits and over 7.1 Billion views on YouTube. His latest album, Marc Anthony 3.0, released July 23, 2013, has received an

Besides his music and acting accomplishments, in 2012, the six-time GRAMMY® and Latin GRAMMY® Award winner launched the Maestro Cares Foundation, hosting a series of fundraisers throughout the year to benefit the non-profit organization and build orphanages in Latin America. He also has his own clothing and accessories line for Kohl’s, and he is a minority owner of The Miami Dolphins. His entertainment and sports venture Magnus Media, is the leading Latin artist and athlete representation company in the nation, and focuses on developing new ventures that bridge content creation and commerce.

On November 2016, Anthony received the prestigious “Person of the Year” honor from the Latin Academy of Recording Arts and Sciences. In September of 2017, Marc Anthony and Magnus created the alliance of artists and athletes Somos Una Voz, to help provide humanitarian relief to areas affected by natural disasters throughout the southern United States, Mexico, Puerto Rico and other affected areas in the Caribbean.  His tours “Vivir Mi Vida”, “Cambio de Piel”, “Full Circle” and “Legacy” have been included at Pollstar’s “Global Top Grossing Concert Tours List.  His OPUS Tour will kick-off September 2019.

Apple loves music. With iPod and iTunes, Apple revolutionized the music experience by putting a thousand songs in your pocket. Today, Apple Music takes this to the ultimate with over 50 million songs, thousands of playlists, and daily selections from the world’s best music experts including Beats 1 Radio, a global live stream. Since 2015, Apple Music has welcomed tens of millions of subscribers in over 100 countries. Streaming seamlessly to iPhone, iPad, Apple Watch, Apple TV, Mac, HomePod, and CarPlay, Apple Music is the most complete music experience on the planet.