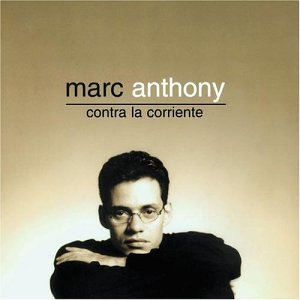 Contra la Corriente (Against the Current) is the third studio album released by American singer Marc Anthony on October 21, 1997 by RMM Records. The album was produced by Puerto Rican musician Angel “Cucco” Peña, with most of the songs written by Panamanian composer Omar Alfanno. The album was well received by critics who praised the vocals of Anthony as well as the songs. The album produced six singles, four of which peaked on the top ten on the Hot Latin Tracks chart. Promoted by a sold-out concert in Madison Square Garden, Contra la Corriente became the first salsa album reach number one on the Top Latin Albums chart and to chart on the Billboard 200.

Contra la Corriente received a Grammy Award and a Latin Billboard Award, and was named the eighth best album of 1997 by Time magazine. It has sold over 400,000 copies as of 2000. The album received a gold certification for shipping of 500,000 copies in the United States. This was the last album that Marc Anthony recorded under RMM Records before switching over to Columbia Records to record his first self-titled English album.