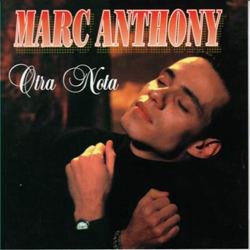 Otra Nota is the debut album by American singer Marc Anthony that was released on January 26, 1993, by RMM Records. Produced by Sergio George, it was the first album by Anthony to record in salsa after starting his career as a freestyle musician. Recording of the album began after Anthony asked RMM president Ralph Mercado to record Juan Gabriel’s “Hasta Que Te Conocí” in salsa after hearing it on the radio during a taxi ride. Recorded on a low budget, the album peaked at No. 2 on the Billboard Tropical Albums chart and reached No. 30 on the Billboard Top Latin Albums chart.