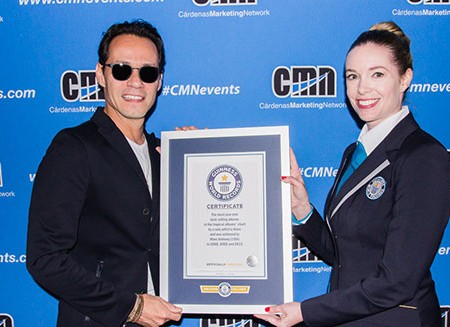 On Saturday, February 6, 2016, international salsa star Marc Anthony wowed fans with a show-stopping sold out performance of his chart-topping hits, marking his return to Madison Square Garden, and hometown of New York City, for the first time in a decade. To celebrate his homecoming, GUINNESS WORLD RECORDS was on site to honor Anthony with the Guinness World Records record title for Most year-end best-selling albums in the tropical albums’ chart by a solo artist. Marc achieved this feat by having three albums top the year-end tropical albums’ chart with Desde un Principio: From the Beginning; Libre; and 3.0 in 2000, 2002 and 2013 respectively.